Presentation of the Images 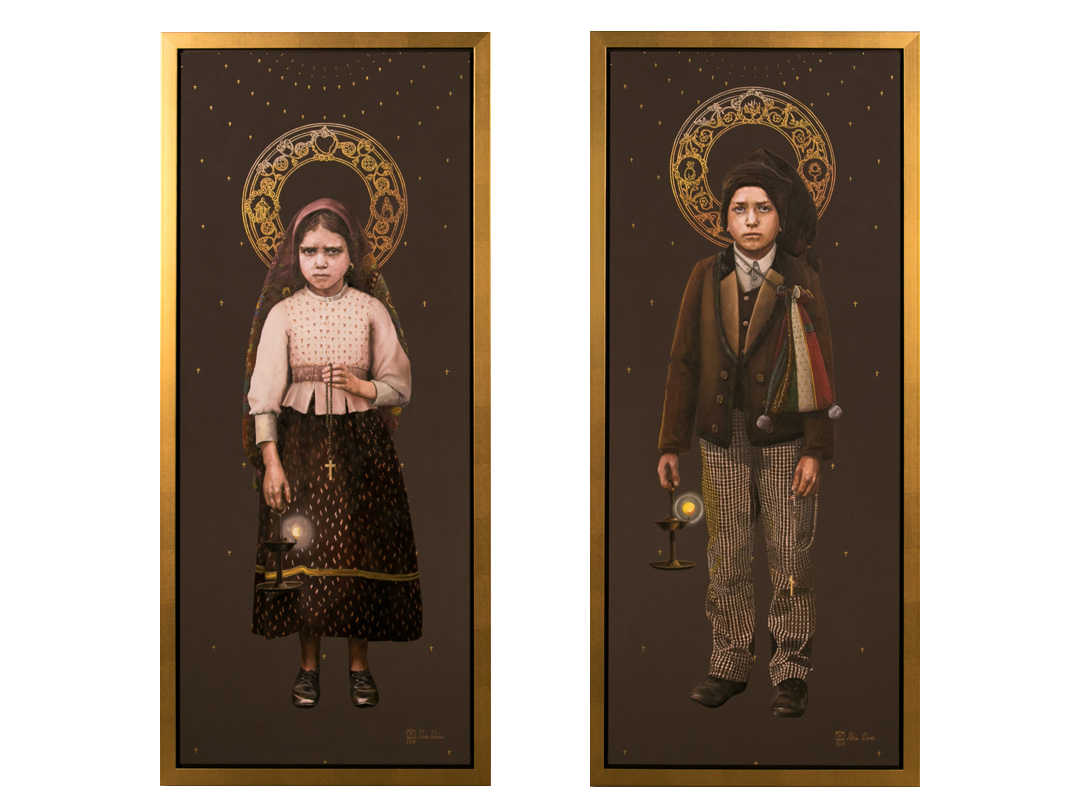 As is the tradition of the Church, during the celebration of the canonisation of a new saint to be included in the Book of Saints, the official image of the saint is presented for public veneration by the faithful. The Postulation for the Cause of the Shepherd Children entrusted the painter Sílvia Patrício with the task of depicting  Saint Francisco Marto and Saint Jacinta Marto.

More than a photograph, these portraits present an artistic design which shows the psychology of the two Saints, the particular way in which they related to God and the specific expression of their holiness.

It was a wish that the portraits would not stray from the effigy that is recognised by the People of God as identifying those being represented; for that reason the same photos were used which had been placed in 2000 on the facade of the Basilica of Our Lady of the Rosary, in the Sanctuary of Fátima, for the beatification of Francisco and Jacinta. The photo on which this depiction was based was taken in Aljustrel, days before the 13 October 1917. The garments of the Little Shepherds, which on the photos are black and white, gained colour due to ethnographic research carried out by the author.

The most evident attributes of these two saints are the Rosary they carry in their hands and the lamp which goes back to an ancient lamp which belonged to the seers’ family at the time of the apparitions. This object becomes, above all, an expression of John Paul II’s words on the day of their beatification, when referring to these figures of the Church as «a lamp that God lit».

Each lamp appears characterised by a special light, linked to the relation each seer had with the shining stars (Jacinta liked Our Lady’s lamp: the moon; Francisco showed special preference for Our Lord’s lamp: the sun.)

On the halo, a feature which is artistically used in the iconographic tradition of the Church as a sign of holiness, the painter included, much like in a piece of jewellery, several symbols which relate the characters to their story and represent their traits of holiness. Saint Francisco Marto has on his halo the symbols of the silhouette of the Angel of Fátima, bearer of the Eucharist, the burning bush, a Biblical symbol of adoration to God, and the Eucharistic species, which remind us of the special bond Francisco had with the “hidden Jesus”. On the halo of Saint Jacinta Marto one can see the figure of the Pope and the Virgin Mary, represented with her Immaculate Heart, a symbol which is depicted at the top of the “filigree” work expressing Jacinta’s generous heart and her surrender.

The expression on the look of the Saints is done in several ways, echoing the characters psychology: Jacinta looks straight at the observer, in an inquiring manner; Francisco raises his eyes to heaven, showing an attitude eminently contemplative.

The background of the paintings is of a plain colour sprinkled with shining crosses the same colour as the halos, underlining how the Church interprets the wise who shine in splendour in the firmament.

The positioning of the Saints on the facade of the Basilica is not similar to the photo in 1917, but places Jacinta Marto first, as the first proclaimer of the Fátima events.

The paintings were adapted to the visual field of the canvas which will be exhibited in the Basilica’s facade. The designer Inês do Carmo, who created them, also made the little prayer cards which will be distributed on the day of the canonisation.